Seabirds, Climate Change and Humans – we are all connected! 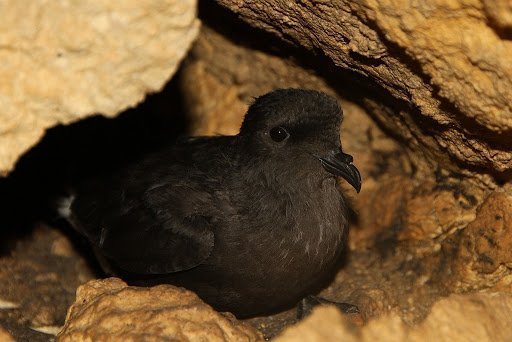 Today we feature a write-up with some really cute and interesting facts about three particular seabirds species common in Malta; and we’ll understand how even the survival of these species is threatened by human recklessness and global climate change.

The Mediterranean Sea is an important area for seabirds, both migratory and endemic. So much so, that the unsuspecting, tiny archipelago of Malta, has its own special trio of seabirds that breed in surprising numbers along the cliffs.

Photo credit: Mediterranean Storm Petrel (Paulo Lago)
The Mediterranean Storm Petrel, the smallest of the breeding seabirds in the Mediterranean, crams its largest breeding colony of approximately 5000-8000 pairs onto the small islet of Filfla off the south coast of Malta.
The Yelkouan Shearwater, the focus of the Birdlife Malta Project – LIFE Arċipelagu Garnija, has an estimated 1700-2500 pairs along the Maltese cliffs.
Approximately 5000 pairs of Scopoli’s Shearwater, formally known as the Cory’s Shearwater, take up the high cliff edges, created another globally significant population of seabird on this tiny island.

Photo credit: Yelkouan Shearwater (Victor Paris)
Apart from having signifcant breeding colonies in Malta, these three seabirds share several other characteristics and habits. All three species are monogamous, pairing for life and often in the same nests. Yelkouans are the earliest breeders, arriving as early as October. As their egg-laying reaches its peak in late February / early March, the Scopoli’s start to arrive, with the peak of their season being mid May. This difference in timing allows these birds to colonise areas in generally peaceful proximity. Finally, the Storm Petrels make their appearance in March, with their earlier breeders starting in May and their latest from July to mid October. All three species feed on a diet of fish, squid and crustaceans. GPS tracking of individual birds throughout the breeding seasons by BirdLife Malta and others, demonstrates the vast distances these birds travel for food, and gives a good indication of how the entire Mediterranean is utlised by these birds for breeding success.

Photo credit: Scopoli’s Shearwater (Birdlife Malta)
Years of research by BirdLife Malta shows that all three species are threatened by invasive predators, light pollution and disturbance during their breeding season. Introduced predators, particularly rats, are a well-known cause of population decline in various seabirds species.

Photo credit: Feeding map of a Yelkouan Shearwater (Gatt et al, 2019)
Other threats, such as marine pollution, incidental capture in fishing lines and climate change could have an additional impact on the future success of these three species. An increase in severe weather events due to the climate change could drastically alter or destroy breeding sites, forcing birds to move into less suitable or crowded areas. More storms could see an increase in ship bunkering, increasing light pollution around colonies and affecting the adults return to their chicks.

Photo credit: Light pollution viewed from an occupied cave (Birdlife Malta)
Another surprising threat to these seabirds is the result of human neglicence. Organic waste from picknicking and camping sustains invasive rat predators during and outside the breeding season. It is hoped that continued outreach with the general public and working with local authorities that waste management will improve in these areas.
Hence the importance to continue to raise awareness about the fact that every of our action has a consequence, sometimes far beyond what we can comprehend. Thanks to the several individuals and the local councils who take the initiative and organise clean-ups in, we are seeing the rise of responsible citizens.